'Doctor Who: The Curse of Fenric' – Ian Briggs (Target) 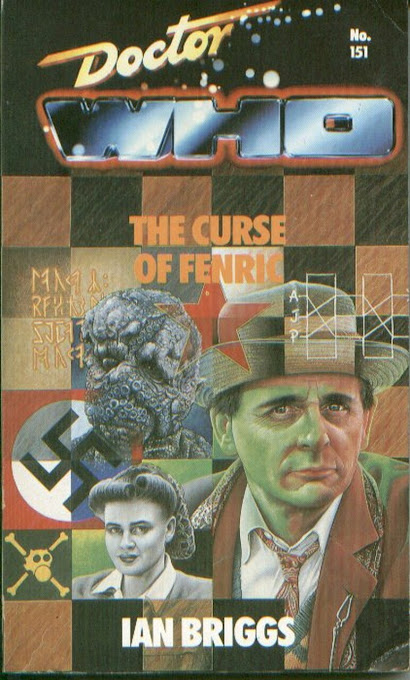 I always seem to find an excuse not to come up with a 'My Top 10 Doctor Who Stories' list but if I ever do, it's a safe bet that 'The Curse of Fenric' will be sat very high up that list. Easily in the top five. I love all Doctor Who stories (well,  not all of them  but you know what I mean) but I have a real soft spot for 'The Curse of Fenric'. I won't go into the 'whys' again, you can either take my word for it or read my review over  Here  ;o) I used to have a copy of the novelisation, back in the day, which I loved to pieces but had to get rid of it during one of many house moves so as soon as it finally settled in that I could be in my current flat as long as I wanted, I had a little look on Amazon and found another copy to replace it :o) I found myself with a couple of hours to kill, yesterday evening, so settled down for a read... You can probably guess which way this post is going but bear with me ;o) 'If this is a top secret naval
Post a Comment
Read more 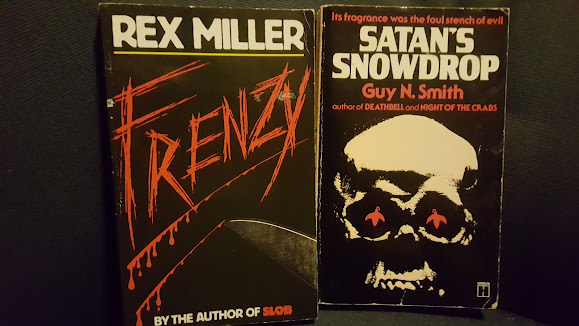 Bloody hell, I'd only just got last week out of the way and now here's another one to deal with. It's cool, I've got this ;o) This should have been yesterday's post but yesterday ended up kind of getting away from me (not in a bad way, just incredibly busy) so it's today's post instead. If I hadn't said, you probably wouldn't have noticed... ;o) But anyway... We're entering that time of the month, once again, where the book purchases start to dry up, mostly because I need to buy food but also because a tiny, guilty part of me starts to think about all the books that I've bought and should be reading... I'm working on that but in the meantime, a few books have still managed to find their way back to mine, just a few... Let me show you. A day will come when I do one of these posts and don't feature a book by Guy N. Smith. Today though... Today is not that day ;o) I saw 'Satan's Snowdrop' going cheap on eBay and had to grab i
Post a Comment
Read more

Another Trailer for 'House of the Dragon'...

‘The Shadow of the Gods’ – John Gwynne (Orbit) 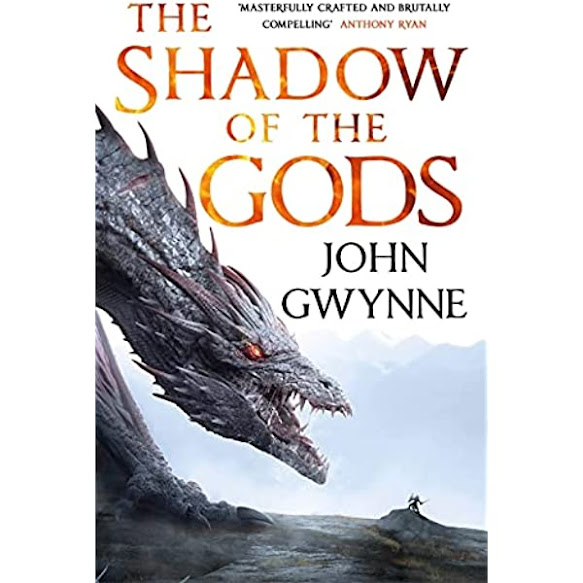 Just to prove that I do read ‘whole books’ every now and then… 😉 It’s been a bit of a crazy week but it’s done now and I’m hoping to get a couple more books under my belt over the weekend. Lets see how that pans out, shall we? In the meantime… For a number of reasons (all of which were on me, not the books), I’ve been the only person (on Book Twitter) who couldn’t get into John Gwynne’s ‘Faithful and the Fallen’ books. Like I said, it’s not the books. I’ve either been burnt out on reading, hellishly busy at work or falling foul of my inability to finish series that are longer than a trilogy. ‘The Faithful and the Fallen’ is only one book longer than that but it counts ☹ I couldn’t help but feel like I was missing out though, especially when the rest of Book Twitter was having a great time with the books, and if there’s one thing I hate, it’s feeling like I’m missing out on something. So I thought I’d give ‘The Shadow of the Gods’ a go and see how I did with that. It was only the o
Post a Comment
Read more 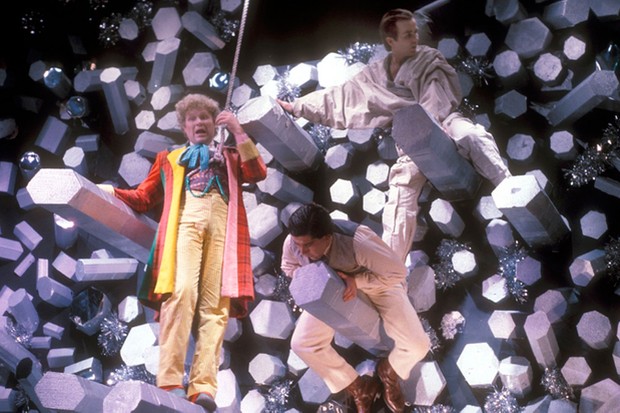 I knew I should have probably stayed out CEX yesterday but I didn't and now I'm two 'Doctor Who' DVDs the better off for it. My wallet may not agree but it's not like anyone asked it so... ;o) One abortive attempt at painting 'Age of Sigmar' miniatures (which I'm really hoping will look better in daylight...), last night, and I thought I'd give 'Timelash' a go. Now here's a story that I remember very little about, other than that I wasn't all that impressed back in 1985. One viewing later and... I remember why now, I remember everything. The TARDIS gets caught in the Timelash, a powerful time corridor that brings the Doctor and Peri to the troubled planet of Karfel. The planet is on the brink of war and ruled by an insane and much feared dictator who punishes Karfelions by throwing them into the Timelash. But why is their leader never seen in person? And what links Karfel to 19 th century Scotland? The Doctor arrives just in time
Post a Comment
Read more 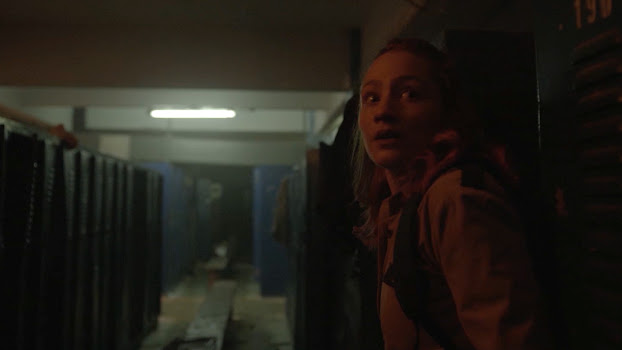 Every month, I forget that I have a Shudder subscription until the money goes out of my account and then I suddenly remember. A creature of habit, that's what I am ;o) Once I remember, I frantically start looking for something to watch, just so I can convince myself that I haven't wasted five quid again. And last night? After I'd seen the money leave my account, I saw 'Virus: 32' and figured I'd give it a go. And I'm glad I did, it might even jog my memory about watching more stuff that's on Shudder (no, that would be going too far...) A rapidly spreading virus transforms people into intelligent, ultra-violent, extra-fast psychopaths who want to kill anything that's not like them. After each wave of attack, these monsters are left incapacitated for 32 seconds while they recover their strength. What can you do in 32 seconds if you want to survive? Security guard Iris and her daughter are about to find out. Can they make it through the night...? I wa
Post a Comment
Read more 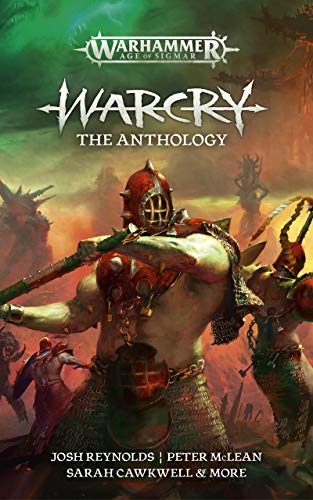 In the twisted remains of the Eightpoints, Archaon has raised the Varanspire as an indomitable bastion against the puppet forces of Order. From its halls, the call of the Everchosen resounds across the Mortal Realms, summoning the worthy to his side. This is a deadly odyssey, for the Exalted Grand Marshall has no use for the weak. Rival warbands of every stripe battle across the wastes of the Bloodwind Spoil, a land filled with unspeakable horrors, to earn Archaon’s favour. Some, such as the Iron Golems, use brute force and unwavering discipline to achieve their ends. Others, like the Corvus Cabal, strike from the shadows, cutting throats and taking trophies of their hunt. All seek to claim their rightful place at the Everchosen’s side, but few will survive even their first nights in this tormented domain. I’m in the middle of a couple of longer books at the moment (‘Shadow of the Gods’ and ‘Empire of Grass’, thanks for asking 😉 ) and I’ll be honest, there are no signs of me finishi
Post a Comment
Read more
More posts

Drop me an email at lordsamperslibrary@gmail.com
All books, DVDs, comics and graphic novels featured here have been purchased by me... unless I say they haven't.